The Legal Eagle XL™ is now available. The XL handles the bigger and heavier pilot with a wider seat design and more wing to support the weight. And all this happens while still coming in at legal weight.   See the November feature story about the Spirit of '03, a special Legal Eagle™ Project. This story also show Scott Johnson's project pictured on the right. 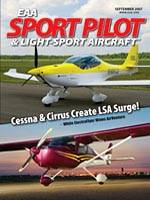 In the story on Page 54 The magnificent Legal Eagle™ built by Joe Engelman of Independence Missouri. This wonderful project is a grand example of what you can do if you have a complete machine shop at your disposal. Joe has been experimenting with many different windscreen designs and has found one that leaves him able to fly the plane without goggles!.

Joe has flown his Legal Eagle™ over 200 times since the project was complete. He very cleverly named his craft "Pursnul Bidness" so when he gets away from the shop in the afternoon he can accurately say he is taking care of "Pursnul Bidness"

Leonard Milholland has created the Part 103 Legal Eagle™ shown in flight and the two-seat Double Eagle™. See the airplane on display in the 2007 Airventure Oshkosh LSA Mall. For more info: Call 281-375-5453 or email Leonard.With good reason -- that is, prices soaring past $100,000 for the most deluxe LSA -- lots of recreational pilots are griping that the SP/LSA rule has priced them out of the market. To many, it seems all the carbon fiber, glass cockpit LSA airplanes are going to pilots selling out of their Bonanzas and Cessna 182s. *** Others lament, "You can't buy a three axis Part 103 airplane that honestly stays within 103's tight limits." And most would probably agree that a Part 103 airplane with a four stroke engine is an impossibility. Well, that's just plain wrong. *** If a simple, single-seat airplane will satisfy your flying interests, you can build Texas designer Leonard Milholland's Legal Eagle™ using his Better Half VW engine for less than $10,000 according to several who report compilations. Yes, you have to scrounge parts and do the work yourself. But a growing support group of other builders seems ready to help. Check the FAQs for the Legal Eagle™.

Leonard Milholland has created the Part 103 Legal Eagle™ shown in flight and the two-seat Double Eagle™. See the airplane on display in the 2007 Airventure Oshkosh LSA Mall. For more info: Call 281-375-5453 or email Leonard.

See the Spirit of 03 Story in the November issue of Sport Pilot. Read the full Story here. Note this file is very large (8Mb) do not attempt on a dial up connection. The story features Scott Johnson's Legal Eagle™ project that he finished after being inspired by the EAA Spirit of '03. This project celebrates the Wright Brothers anniversary by having the 103'ers build a Legal Eagle™ (mostly at Oshkosh).

*It flies like a Cub, a slow Cub. These were the words I got from Mike when he had landed after test flying my Legal Eagle™ ultralite. Mike Kimbrel's opinion was very valuable to me as Mike has many thousands of hours in a great variety of planes. Mike owns a DC3 and 14 other planes that he keeps at his farm airstrip in Oakville, Washington. He recently flew to England in his 310 Cessna mostly IFR so he was well qualified to test the handling of an ultralite. He is also the designer of the Banty ultralite and has sold many sets of plans for it.